Sooo, things here have been busy. Over the weekend we moved a fair portion of our stuff to the new place (Basement apartment of where I work) and have stayed here all week.  No internet largely so it makes posting difficult. Luna has done fine with the transition, feeling right at home, a bit protective (barky) actually, going to have to straighten that out soon. Chris has had fun thus far, shooting blackbirds in the bird field, riding the awesome zero turn mower, and even shooting some Chukar over Luna. Which brings me to today’s photos.. 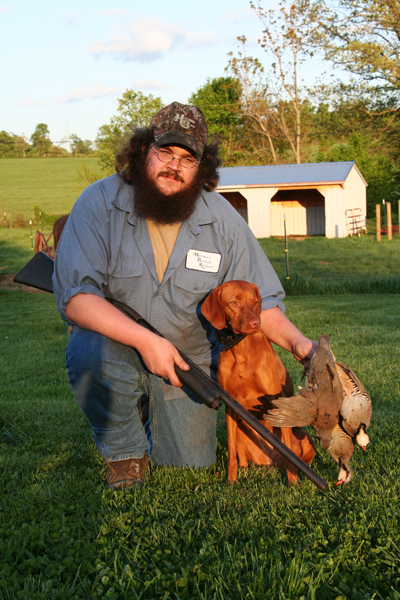 A red bird dog, chukar, and a gun.. what more could a man ask for.

the handler should get a photo with the dog too, right?

Almost forgot that photo.. I know some probably would prefer I didn’t post it.. but I’m proud of the work I’ve put into training my dog, and what a good shot my husband is..( and it’s my blog )

She did well overall. The first retrieve was fantastic. Chukar dropped on the other side of barb wire, in the cow pasture, she went out there and searched and searched, found it and brought it straight back without dropping it. The second retrieve could have used some work. Was a close shot, but the bird was still alive, which she didn’t seem to sure of. So she mouthed it a couple times and didn’t quite know how to hold it. But eventually she got the job done and I worked her on that bird a bit more.  I have a feeling the hesitation/sloppiness was largely due to the bird being alive and making noise. Over time she will most likely gain confidence and not have a problem with that. Time will tell. Anyhow, it was an enjoyable evening in the field.

This is called tick picking.. We ran into a nest of them at the arboretum the other day. Took a total of about 13 off Luna, 80+ off chris and about 6 on me (I was not walking where they were, and it happened within like 15 minutes).. Not fun, but I think by now we have gotten them all.  Neither chris nor I have ever seen that many before all at once, pretty insane.  Anyway, least I was able to get a couple photos, which you can check out on my other blog PHOTO BLOG.. Getting the hang of my new lens, haven’t gotten around to reading manual though, I should.  I will post some play photos next. For now, must go see about waking up the husband.. and then get a start on mucking out the last horse stall.

I am a native of Virginia but recently relocated to Maryland I often feel I am simply a visitor... here to take note of little things people often pass by... I enjoy photography, family, the outdoors, reading, my vizsla... etc etc
View all posts by Anna →
This entry was posted in Everyday Life, hunting, Uncategorized and tagged animals, canine, chukar, dog, hunting, pet, photo, photography, pointer, upland, vizsla. Bookmark the permalink.

1 Response to This and that..