Finally got around to making a new header for the site. (I really should be working on unpacking more, but couldn’t stand to look at it any longer).  This one fits the season a bit better. What season is it anyway? These 90 degree days sure make it feel more like summer than spring.

Yesterday, Luna had her first trip to the river in quite a while.  Chris and I went fishing and took her along.  She browsed the banks while we attempted to catch fish that apparently were there no longer.  She went in after a stick or two but seemed content to watch things, and was very good about leaving my lure alone.  Later we did some recalls along a skinny path that was beat down and Luna seemed to enjoy herself.  I believe the plants bordering the path were stinging nettles of some sort, though chris and I didn’t feel any ill effects from any brief contact. Luna however kept wanting to run into them to track some critters.  They stood nearly twice as tall as her, it was hilarious to watch her run about in them, we kept track of where she was by the moving nettles.

Anyhow, moving on. There has been less running due to the heat, which produces a less than content dog in the evenings. I need to think of some creative ways to wear her out, though she still is more relaxed than when we lived in winchester.

On to the pictures.

Some evenings it actually cools down early enough to allow for some play.  The novelty has yet to wear off between these two.  This morning, after Luna finished her breakfast of kibble and some canned tripe, Dover (the GSP above) proceeded to lick her face all over in hopes of finding a bit she missed.  I love how fit these two look in this picture, love that they found the light pocket too. 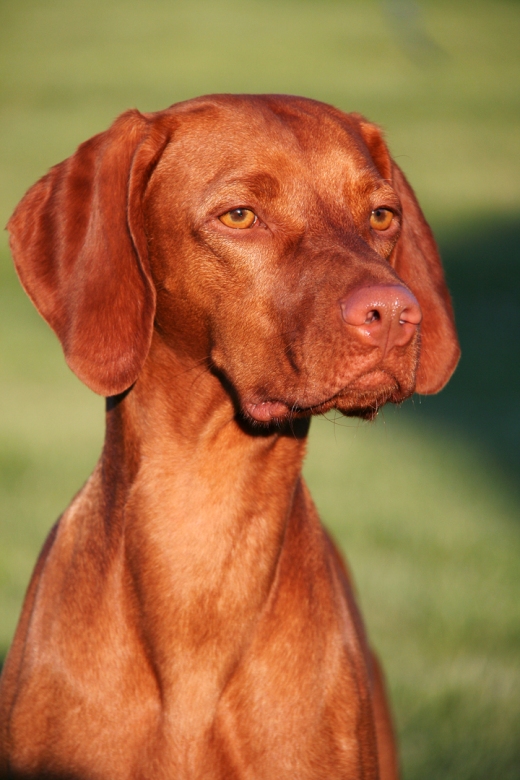 Pretty much LOVE this shot.. Many still say she looks like a puppy, probably due to her size, but sometimes she looks very wise.. too wise for her own good.

ALright, off to unpack more. We have a washer and dryer on the way later this week. SO excited.

I am a native of Virginia but recently relocated to Maryland I often feel I am simply a visitor... here to take note of little things people often pass by... I enjoy photography, family, the outdoors, reading, my vizsla... etc etc
View all posts by Anna →
This entry was posted in Everyday Life and tagged bird dog, dog, dog behavior, dog life, GSP, heat, pet, play, pointer, portrait, puppy, river, summer, swim, vizsla. Bookmark the permalink.