I wrote this post last week hoping to have time to get to the pictures shortly after… that didn’t happen (shocker) and then when I was ready with my pictures, wordpress was not (go figure).  Anyway here is a long overdue post.

I love having more light after work, I just wish I could stop the clock so by the time we got back inside it wasn’t already 8PM.  Yes I’m one of those 20 somethings that actually goes to bed at a regular hour, I’m talking about getting nearly 8 hours of sleep a night.  If I stay up past 10 0r 11 I feel it for 2 or 3 days.  Weird? Probably, but I like being well rested and I figure I will have plenty of time to be sleep deprived later on in life.  FYI the following is kind of detailed/long winded, so if you don’t enjoy training or hunting then you may get bored… I warned you. 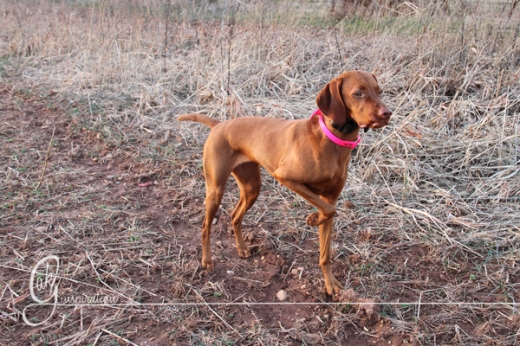 But moving on, we had a chance to take Luna and Wyatt out to do some bird work again.  First we sent Wyatt out to see if he could find leftover Chukars from a client who used the field today, and we had a pheasant we wanted to put him on too. First we worked the pheasant, as was no surprise to me, he went right in and picked it up and headed back to us with it.  Eventually it fought enough to get free and we were able to shoot it.  Can’t really fault a puppy for having no fear and going in to grab his first cock bird ever.  Can you say drive?  Sure ideal would be that it would get up and fly, it had been put to sleep, and is also not a wild bird.  Once it got out and was shot he picked it right up and came back to us with no hesitation (no shock there).  Wyatt went on to find 2 chukars and the other pheasant that got loose earlier.  We were not able to shoot the pheasant, or a chukar due to it heading towards the road.  But the other chukar he did really well on, got birdy in a bush and you could see his brain working as he figured out how to get it out of the cover. It was shot and he went and picked it right up and brought it back.   It’s nice to have a dog that enjoys retrieving, easy way to exercise the dog too.  Though Luna’s retrieves are getting better, but we’ll get to that.  So a good day for Wyatt, next up for him is some remote sit work, quartering the field, as well as force fetch.

Now overall Luna is making progress. I have NO doubt anymore that she understands fully the “whoa” command, which is nice for both of us.  I will try and make this short.  She hunted well, she was not covering a lot of ground at first, but I know this is due to her knowing our usual places for planting birds so she was being cautious. Plus the whole field probably smelled like birds and dogs with the client there before us, and Wyatt.  Anyway, nothing to be negative about really with how she hunted, she loosened up and got out later on, she’s just too smart for her own good sometimes.  She went on point quickly and though chris didn’t think a bird was there, Luna knew there was, and sure enough I spotted it’s head.  She did everything great on the first bird.  Held her point, intensity was good, and she was steady through wing-shot-fall and retrieved it well.  She is getting much better about going out, getting the bird and basically coming straight back.  She is less mouthy (She has never been hard mouthed, just likes to fiddle) and more confident than she was at the beginning of the season. I will admit the retrieve is not her favorite or rather the compliance portion, she would love to run off with that bird and have her way with it.  But she is starting to understand it’s really in her best interest to just bring it back quickly and she gets to go back to what she loves, hunting.  So overall I was not blown away by her retrieves but they are good enough that she should have no problem passing that section in Senior Hunt tests.

The second bird was interesting, she is also trusting her nose more, and thus she pointed the bird a ways out.  Chris had planted them but did not remember where this one was.  So after a while of searching I went in and tapped her on and told her “easy.” I had never done this before and she did great.  Went in nice and easy and seemed to know what I was asking, well chris still couldn’t really find it, but then I spotted it off to her left (not where her eyes were lol).  By then she had waited upwards of 5 minutes, and she was waaaay into getting this bird. So when we finally flushed it up, she broke slightly and stepped forward about half a foot. So I grabbed her and placed her back in the original spot and made her whoa again.  Then sent her on for the bird.  By then her marking of the bird had degraded a bit and she went deeper than it was and ended up coming up on another bird.  I think I saw her flash point, but then the bird was up and Luna was off.  I was able to stop her after about 5 seconds of chase, and I whoa-ed her in that spot and did not let her go find that bird. (we did not shoot it). In hindsight I probably should have taken her back to the location of flush and made her whoa there then heel her away.  Lesson learned on my part for next time.  Then I brought her back around and had her find the downed bird (#2)  WHich she did and brought to hand.  I then sent her off for the 4th bird.  She found and pointed it, but broke slightly on the shot, this time only about 3 inches.  So I put her back in the original location and  made her whoa, then sent her again.  I don’t know if I should let her get retrieves if she breaks at all.. Thoughts on that? Usually i make that decision based on how bad she breaks, but maybe I need to stop letting her have them now that she knows what is asked of her.  Thoughts? When do you let them have the retrieve and when do you not reward them with that? 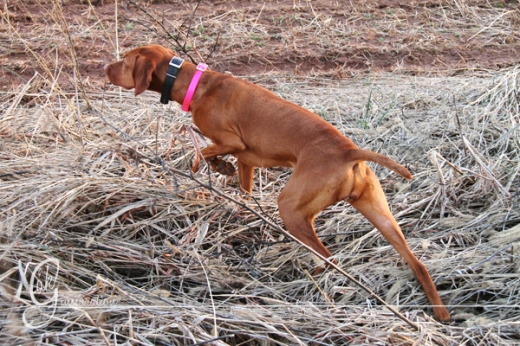 So that’s pretty much it. Overall I am happy with the session, and I’m even more glad I went with my gut and did not include a brace mate on this session. Progress is being made, and it’s exciting, hopefully we can get her ready to run in her first hunt test by April. 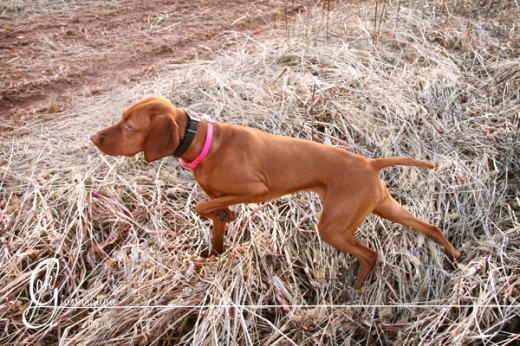 I am glad I also brought the camera, being her main handler  AND the main photographer in most training days, I do not have many photos of her hunting.  That will begin to change as she continues to steady up further… until I swap it for a gun but I’m in no rush to do that.  Saved my fav. for last (Can you guess why??).  I love having this series of photos to document this hunt. I hope I can keep the trend up. 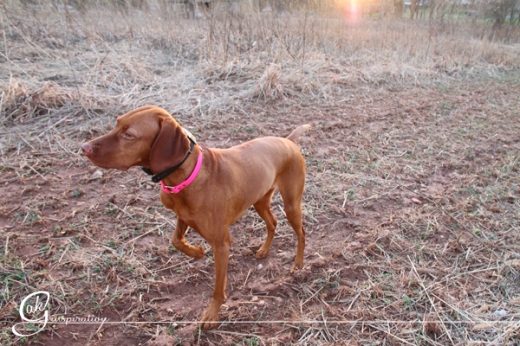 Happy Friday (now Tuesday, but may as well wish you Wednesday) All

PS. if you couldn’t figure it out, I love that this photo kinda broke technical rules, has a bit of lens distortion causing her to seem more in your face, and the sun flare though not complete adds a lil somethin’ too.  But I also like them all, as they all show her intensity.  There often is no time to compose much of a shot when shooting subjects like this, if you think about it too much the moment will be gone.  Couple more photos including wyatt up on the photo blog

I am a native of Virginia but recently relocated to Maryland I often feel I am simply a visitor... here to take note of little things people often pass by... I enjoy photography, family, the outdoors, reading, my vizsla... etc etc
View all posts by Anna →
This entry was posted in hunting and tagged AKC, chukar, dog, dog training, hunting, pet, photography, upland, vizsla. Bookmark the permalink.