Our love of shed hunting is rubbing off on our good friend Ed, master of Team orange.

Here is the furry part of Team Orange… unfortunately I don’t have any pictures of Ed, weird right? I am sure he doesn’t mind though. 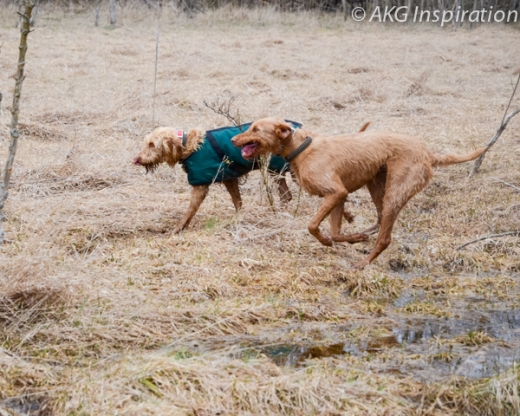 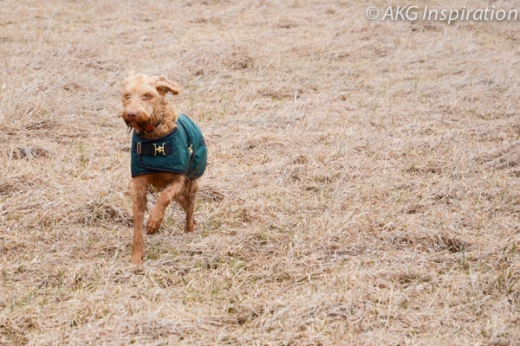 This is miss Winnie

And this is Finn, do you think they enjoy running in the fields? 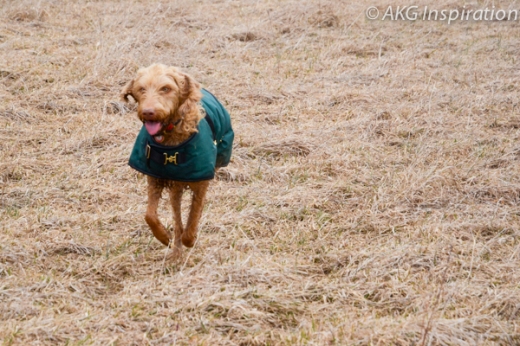 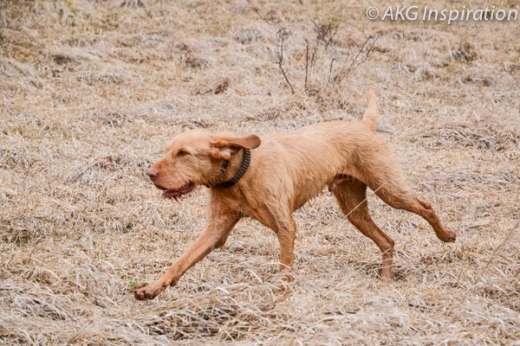 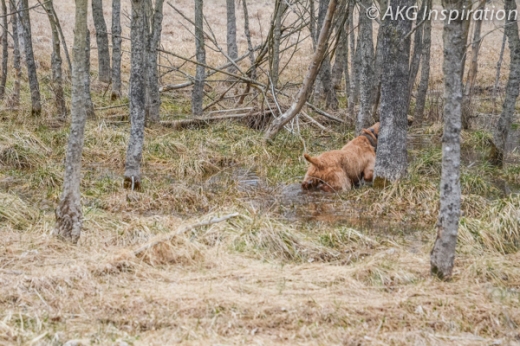 Sometimes all that running makes you hot and you just HAVE to take a dip in the swamp… by laying smack down in the water. This is apparently a trademark move of Finn’s but it happened so fast I hardly was able to catch it. Typical male Vizsla too, wire haired or not they all love to do it to cool off.

He doesn’t see anything wrong with it.

Luna doesn’t either, though she prefers to dip her toes and legs in it as she searches for fish and bugs.  While our dogs are off hunting and chasing anything that moves, we continue our search for antlers… sometimes we get lucky, but more often than not we just find parts of deer

I love watching dogs run the fields and woods, and boy do our dogs love it (really hard to get photos of them too)  When we are out a ways in the woods and away from other possible hikers I usually just let Luna range. I make sure I can see a glimpse of her every couple minutes. Honestly that is usually how I keep track of her, I stop and just scan the woods for movement. You can’t usually hear her moving around the woods unless she is a couple feet from you. She is like a little deer running around the woods, I love watching her.   And somehow she always manages to keep an eye on where we are at and never gets left behind. And if it’s been too long since I saw her I just call her and she comes running, usually from the opposite direction I thought she was.

I often make her sit and wait, wipe her clean of spit on her face and the occasional pricker that she gets on her face… then I release her to go back to what she loves, running the woods.  She sometimes is required to come over and get some loving, but really she much rather do without that when it comes to being in the woods.  She is such a different dog in the woods compared to the house, which I love and hate (tests me a lot more in the woods than house since it’s so enticing to her).

This outing was the first time our two dogs have met Ed’s two dogs… we were slightly worried about it as both our girls are kinda picky and more serious about other dogs, and both our boys are rather oblivious and goofy.  So we just made sure everyone just gave everyone else space. No greetings needed really, just go be dogs and run the fields and ignore eachother.  I am very proud of how everyone did outside of a couple greetings to the humans causing interactions there were no problems. And as the hours wore on they began to run the fields together checking in with various humans that were nearby.  So fun to see and good for everyone. 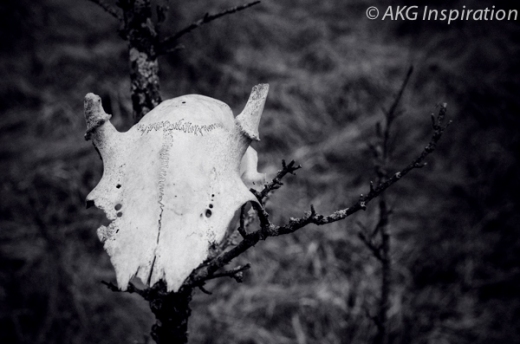 And sometimes those jaws can lead to old “dead heads.”  This one would have had antlers on it but it was so old they had fallen off.  Dead heads are basically a skull with antlers on it. Not exactly like a shed but they still count for something in the shed hunter world.

And sometimes we even find antlers.  After 3 hours of walking the woods and fields chris came up with a nice one.

We encourage the dogs to take part too

If chris and I are separated when we find one, we will often get Wyatt to bring the antler to the other. It’s pretty fun to pass antlers and bones back and forth for the other to see.  Wyatt loves it too and has begun to automatically take it.  Now we need to work on him bringing them to other people for us too. Like our friend Ed.. But maybe not an antler as big as this next one.

Why you ask?? Because it may just seem inconsiderate since our awesome friend Ed has yet to find a shed. 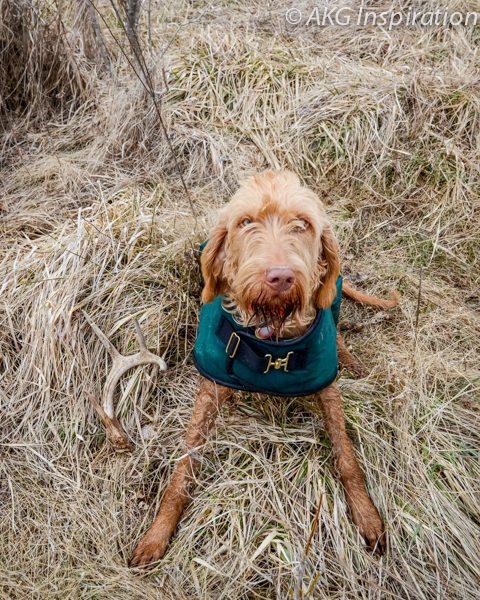 His girl Winnie found one though… and decided to pose with it. 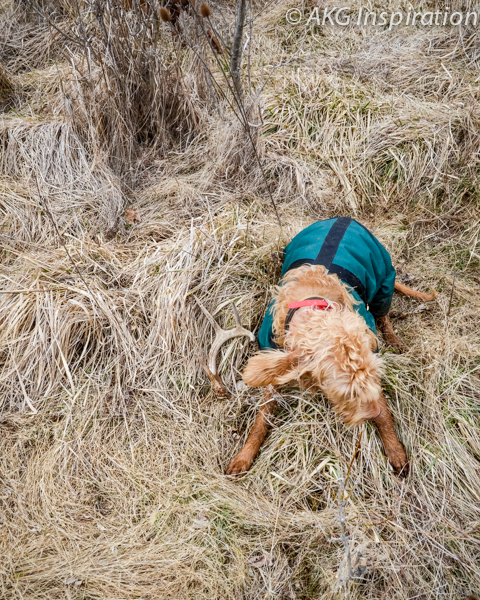 Really though she found the one I placed in the grass to take a picture of, and she Refused to budge from that spot. She was going to have a picture with her antler. Such a ham. 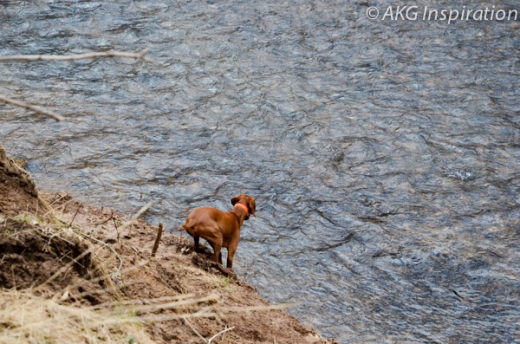 After all the running in the fields and mud we took the pups to the creek to wash off.  Really steep banks lead to this creek but the dogs don’t mind at all. At one point Finn climbed out of the river and up a bank that was 90 degrees steep, no joke. And he didn’t have a problem with it at all. Wish I had a good picture of that. 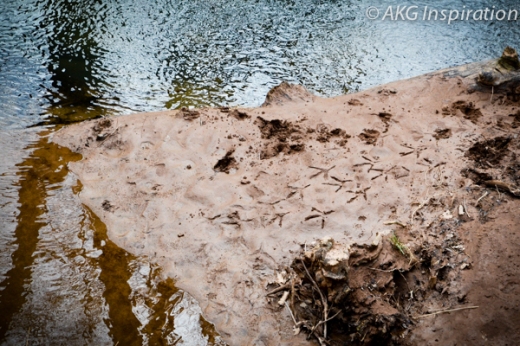 ( PSS. this weekend we spent 9 hours and some odd minutes in the woods shed hunting… the dogs are totally wiped out. WHoot!)

I am a native of Virginia but recently relocated to Maryland I often feel I am simply a visitor... here to take note of little things people often pass by... I enjoy photography, family, the outdoors, reading, my vizsla... etc etc
View all posts by Anna →
This entry was posted in Everyday Life and tagged antler, d7000, deer, heron, hiking, hunting, lab, nature, nikon, photography, pterodactyl, shed, shed hunt, vizsla, woods, yellow lab. Bookmark the permalink.