I know it’s been a while and it doesn’t look like I will be posting in the near future… this is the busiest time of year for boarding and we are in the thick of it now with July 4th holiday boarders (for those that don’t know, I work at/run/ am slave to a dog boarding kennel). So I figured I would lay it on thick to tide you over… pictures of course.  Please enjoy the following very random and way out of order photos from my phone.  I have lots more, but of course the smart phone is being stupid and won’t download them to my mac so you will have to enjoy some rather old ones.  And for those who follow me on Instagram, I apologize you have probably seen most of these. 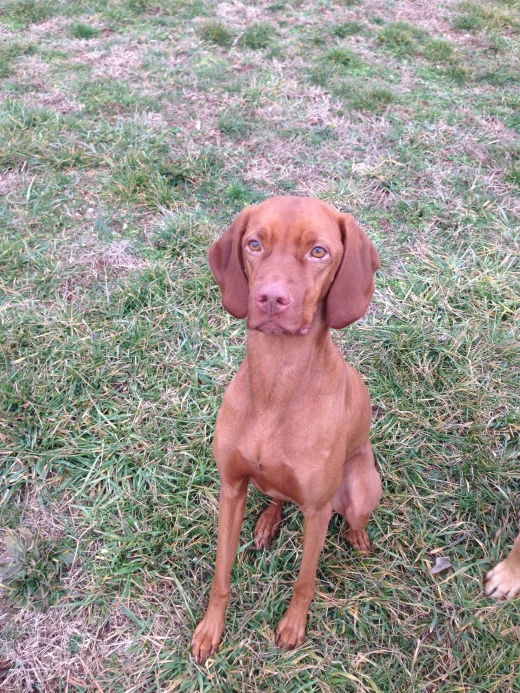 Look at that cute face, you wonder why I can’t help but take pictures of her all the time… even if she is typically unimpressed. 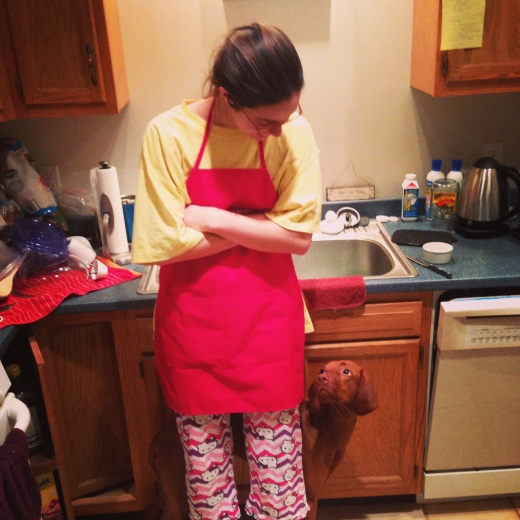 Who doesn’t bake in their hello kitty pajamas?? Actually I think I may have been cooking dinner.  Either way Luna was being cute.

Just a couple pictures of Luna’s nails… which are too long, and drive me nuts because it’s our (by that I mean Luna and I) least favorite task. BUT I think after 5 years of having them dremeled multiple times a month she is finally giving up the fight.  I have not tried anything different I think it just took time. She has never liked it, but that has never stopped me either.  I can’t stand long nails, makes me feel bad for the dogs… funny I would own a dog who hates having her nails done too. Oh the irony.

Had to include the wyatt man, even if he is making a silly face

Not that Luna’s looks any better

I think Luna is rubbing off on Wyatt’s sleeping habits. They lay like this all the darn time. 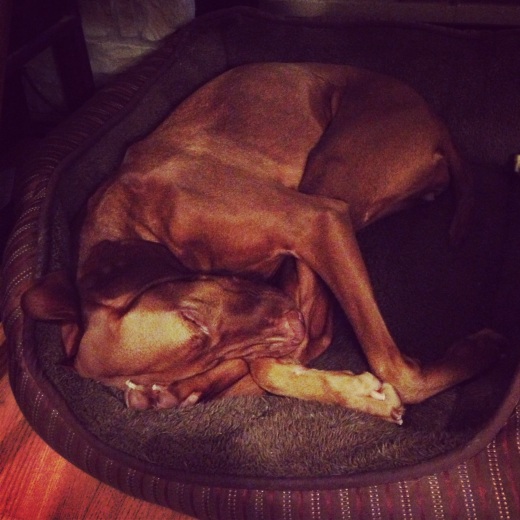 He has not mastered the pretzel/yoga/gumby dog sleeping though. This is one of her farthest bends yet while sleeping I think. 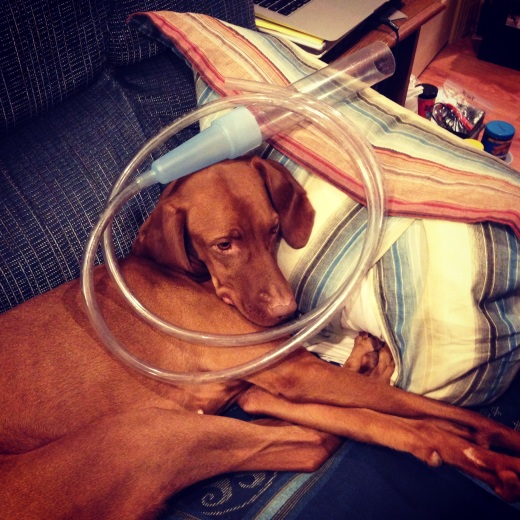 Sometimes I just do things because I can.  We were getting ready to do a water change in the fish tank, and we asked Luna to hold the vacuum.

No worries though, she gets plenty of loving for all the things we make her  suffer through. 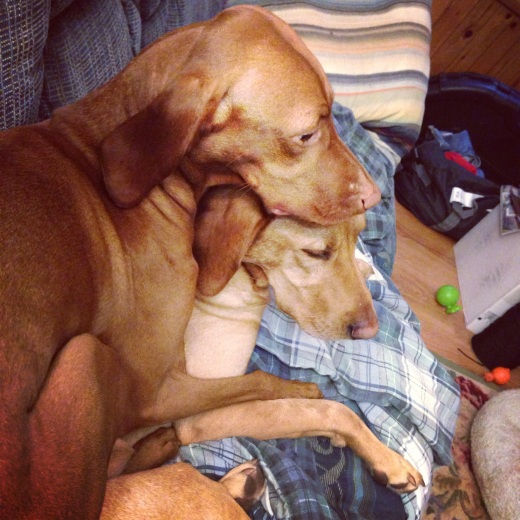 This is their new thing, no matter what the other one is doing on the couch one of them will be laying their head on the other.  Even if the other is still playing with a toy (usually Luna) 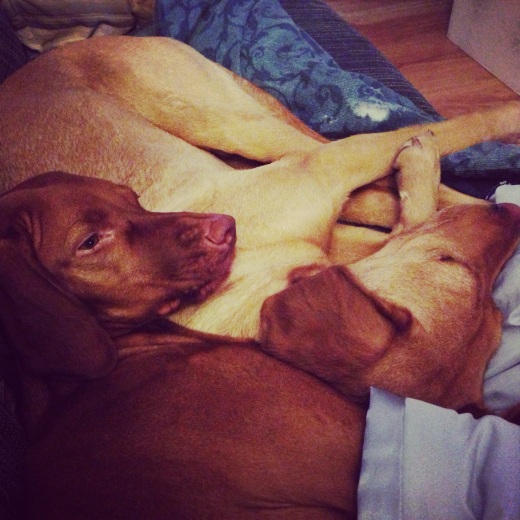 This is what they do all week while I work during the day, thus there are lots of photo opportunities.

Yes that’s a hot dog…. I like to make Luna work for her food, very important for the smart, independent, willful Vizsla that she is.  She of course got to eat it afterwards.  A very big reward for such a simple task. (It was actually her breakfast as they were freezer burned and no good for the Mr. anymore) 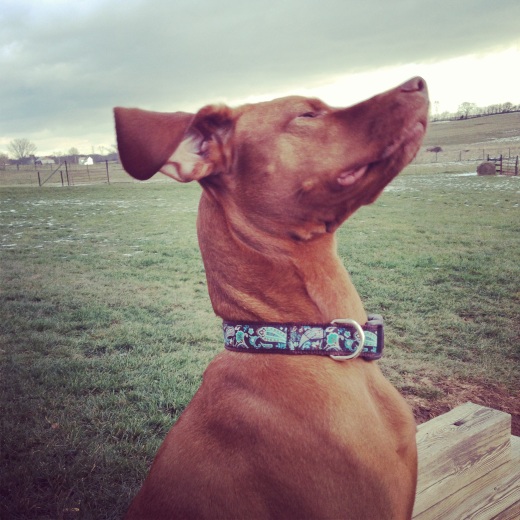 Outtake from some pics i did of the collar she got for christmas. I find it hilarious

I thought this one was funny as they look like they are conjoined.

I believe she was probably begging for some popcorn in this picture, very hard to resist this face.

We had to make sure the vest was of good quality (no worries, it’s Cabelas… and way too large for her anyway) 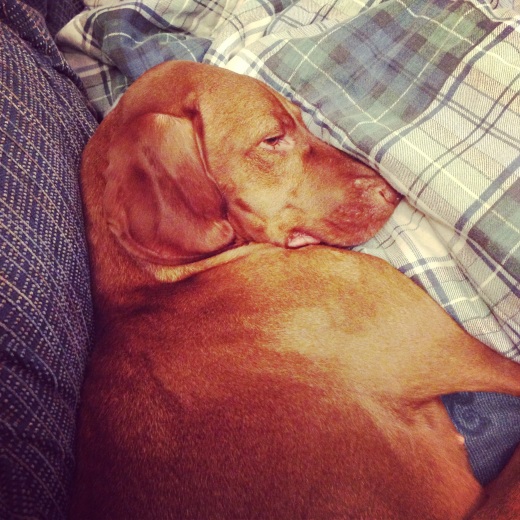 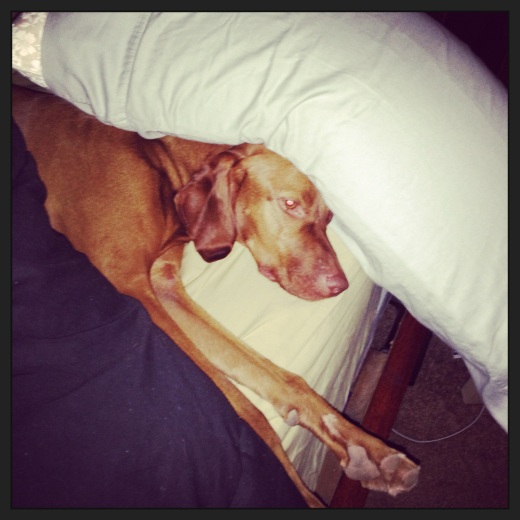 This is what I found when I came to wake my husband from a nap… Vizsla thinks she is a human, all up in my spot. 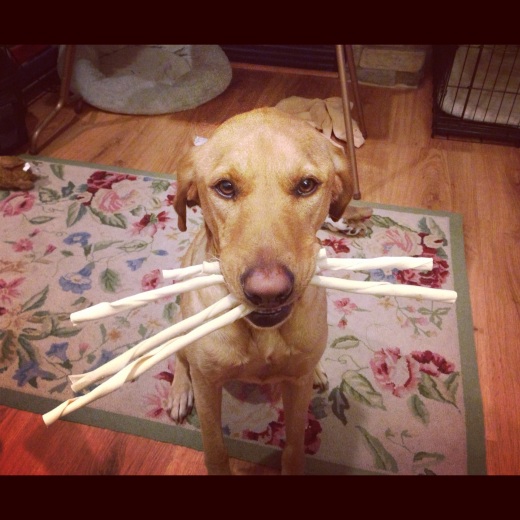 Again, because we can. 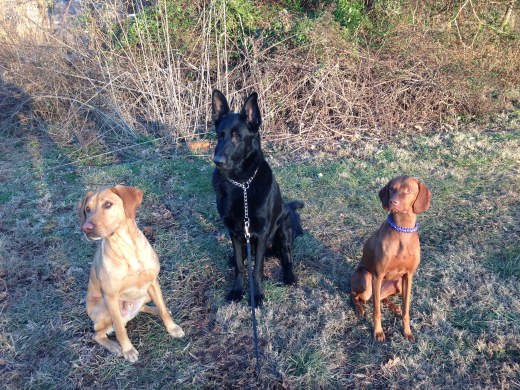 Wyatt, Kohl (daycare dog) and Luna enjoying a walk in the field.

She always has to check out the fish tank

First swim in the river for the season. Hopefully headed there tonight to try out our new kayaks! Whoot.

Have a happy and safe July 4th

I am a native of Virginia but recently relocated to Maryland I often feel I am simply a visitor... here to take note of little things people often pass by... I enjoy photography, family, the outdoors, reading, my vizsla... etc etc
View all posts by Anna →
This entry was posted in Everyday Life and tagged dog, Instagram, iPhone, life, phone, vizsla. Bookmark the permalink.