Chasing plastic bags…. or not

So we finally did it. One of my goals this year was to finally give Luna a go at Lure coursing.  When I saw there was a practice day and CAT test within a half hour from me I jumped at the chance.  I sent entries in monday hoping they would get there in time.

For those wondering what Lure coursing is, it’s a sport designed for sighthounds.  It usually takes place in a field and involves a pulley system strung across a field on a course, the pulley drags several plastic bags on a string which mimic wild game’s path.  So basically it’s like plastic bag bunnies to sighthounds.  Well the sport has grown in popularity, AKC now has a lure coursing title for non sighthounds,  and  more clubs are beginning to offer CAT (Coursing ability tests) tests open to all AKC (or AKC partner) dogs.  It’s a pass or fail test, basically they have to show interest the entire course and finish in under a set time frame.

With Luna’s love for chasing critters (and a flirt pole) I thought she would take to Lure coursing like a fish to water.  So saturday I got an early start, hoping to beat any lines for the practice day.  I arrived and was one of the first ones there, my friend was nice enough to humor me by bringing one of her pups by too. 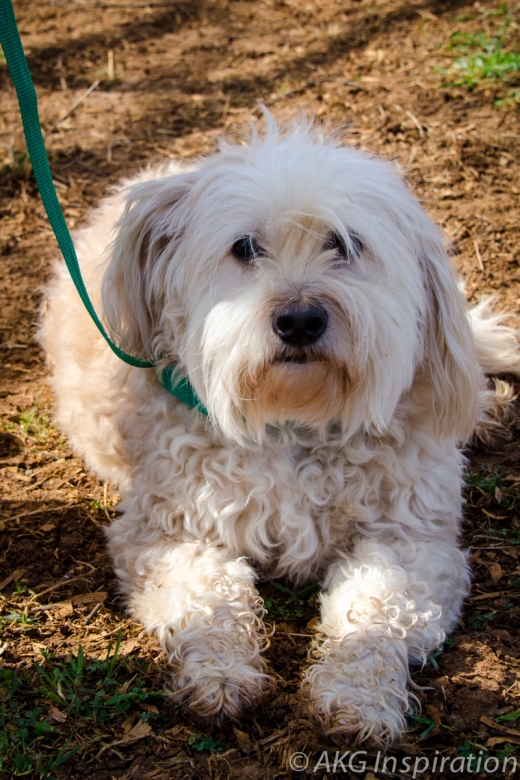 This is Banjo, isn’t he cute?  Also a very good dog as are all of my friend’s dogs.   It was a tuff long morning of waiting and waiting s’more as they got the course set up and the machines working.   We knew he LOVED the flirt pole he plays with at home, and I have been trying to convince her to give this a shot with him too.

He was one of the first dogs to have a go and he took off like a rocket. Yay Banjo! 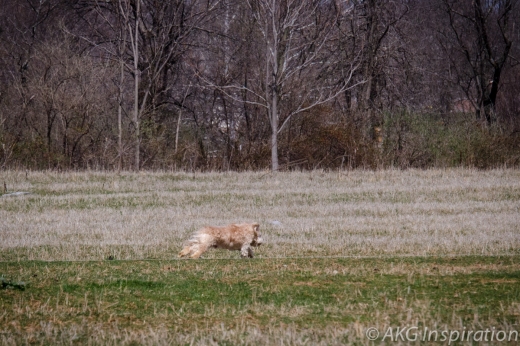 He did really well till he was about 50 feet away and realized mom wasn’t there and snapped out of his chase.  Told you he was a good dog, I was worried he wouldn’t want to leave her.  When we go hiking we keep the dogs in pretty close so hers aren’t too used to being allowed to just go go go.  Can’t blame a good dog, maybe she will be able to build him up so he knows it’s okay to run further.  It was fun while it lasted at least. 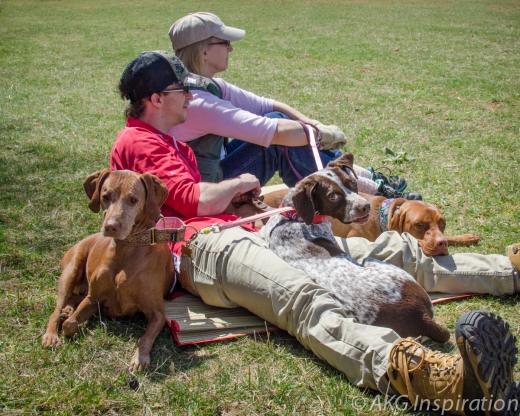 More of our friends showed up and added themselves to the list, well they added their dogs.  On the left is a recent addition to the family, a sweet rescue named Vivi.  One of the cutest German Shorthairs around named Gus and their spitfire vizsla girl Ez. And about that time the pulley broke (again) so we all waited s’more.  It was quite frustrating but at least the weather didn’t get hot as quick as it was supposed to.

Finally it was Luna’s turn, I managed to snap these on her return. 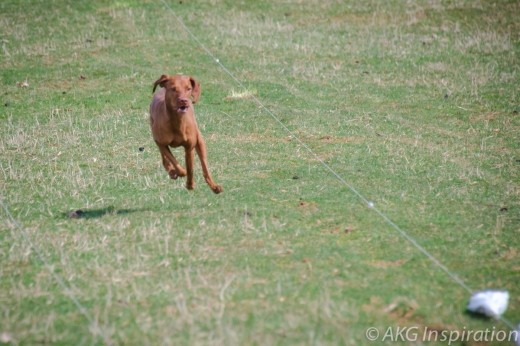 She looks zoned in to the bags here, but I think she was still wondering quite a bit about what she was supposed to do with these bags.  She took off quite well and then she reached the top of the hill and stopped.  The lure kind of dipped out of sight some and she was standing there watching the and trying to think it all out.  At least that’s what I think. 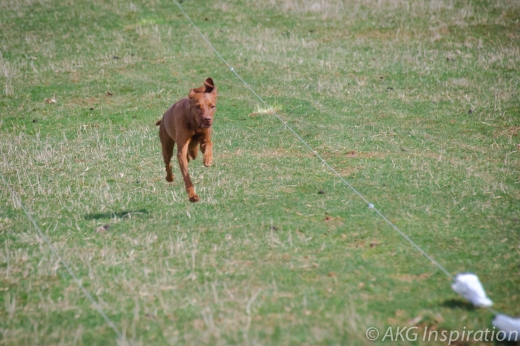 She is far too stinking smart and is a huge observer by nature.  I really do think she was trying to pattern it out a bit, especially since you can see the string and repair knots too in the string.  The string caught her at one point so then she didn’t know if she was allowed to cross it, she kinda treated it like a barrier.  Sometimes I felt like she didn’t know what she was actually supposed to be chasing. But chase she did 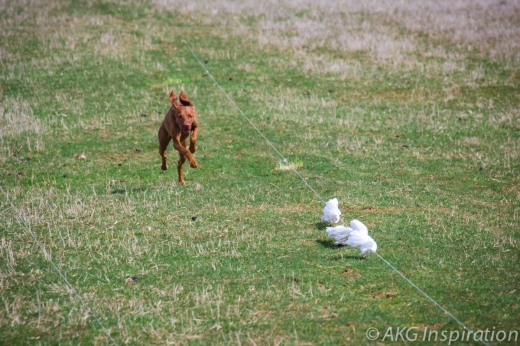 After our practice run I signed her up for a second run, to see if she would put it together a bit more the second time.  After more pulley breaks and waiting it was finally time for my friend’s dogs to run. 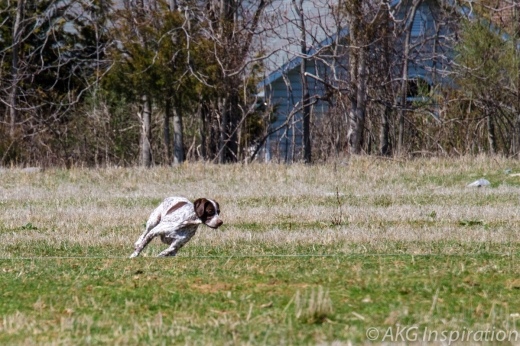 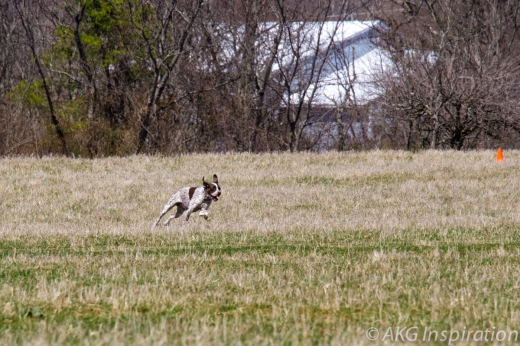 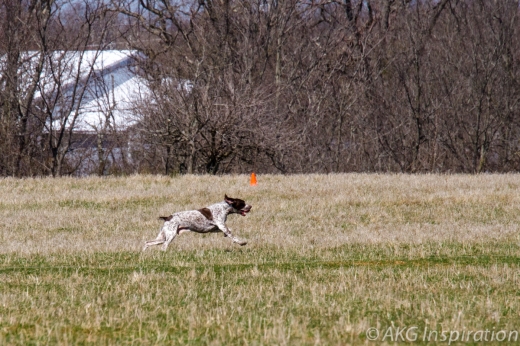 Not really sure what he was chasing but he was running and seemed to be having fun anyway.  Oh well, I don’t blame him they’re just bags after all. 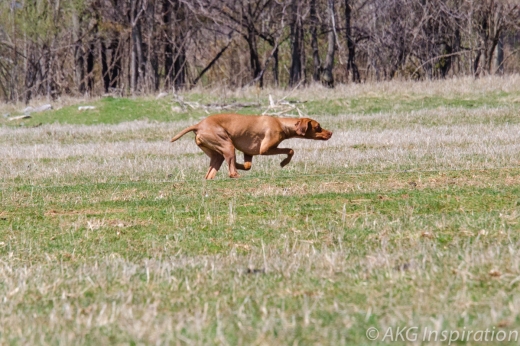 Next was Ez, she too took off pretty well and seemed to lock into the bags a bit… but then she had to poop… and it was a long complicated one lol, poor girl. 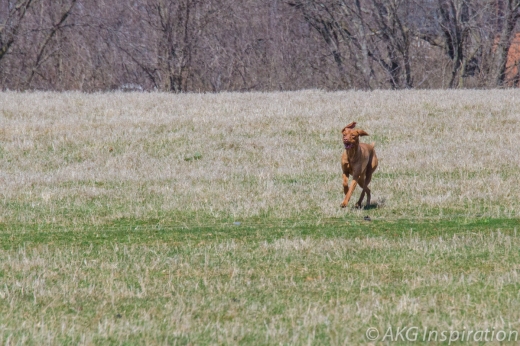 After her biz was done Ez had mom come help her figure things out, and at the end she was beginning to get the hang of chasing those bags.  I do think she might take to it with some more practice. 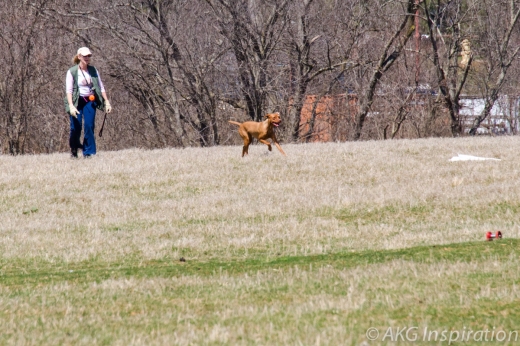 After some disappointing runs with our dogs, watching as lure coursing loving dogs got loose and chased the lure while their owners chased them…. and yet more waiting.  It was finally Vivi’s turn.  I made a joke that maybe the old girl would shock us all and take to it the best. 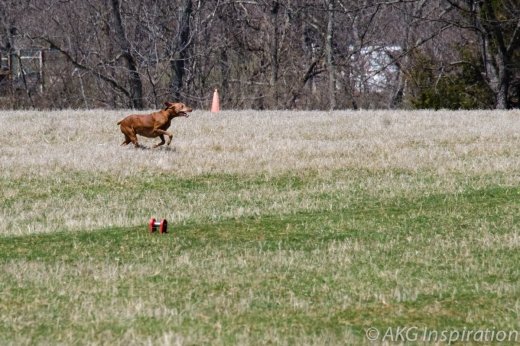 Guess what???? She was a natural and locked into those bags the second she took off, and followed them the entire course. 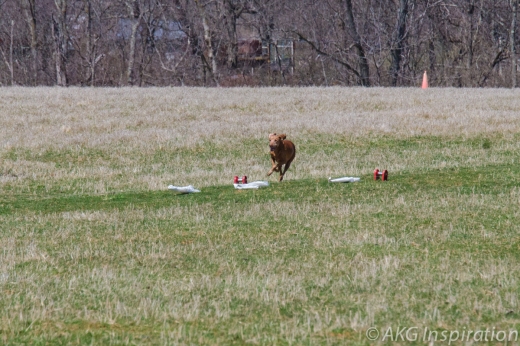 Come the end of the course she really had the hang of it and looked like she was having a ton of fun. 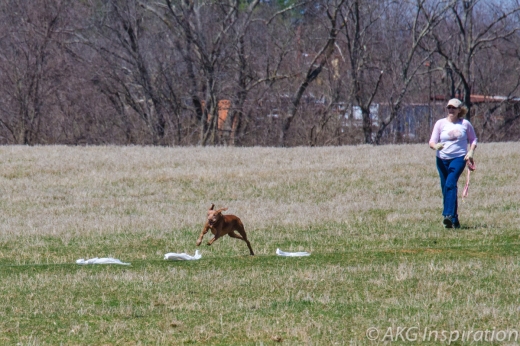 How amazing is it that this old girl, who recently got rescued by this family did so well?  These dogs are amazing, you really can never count them out.

I did a second run with Luna, and sadly it was worse than the first.  She didn’t want to chase it at all. I really don’t have any concrete idea why, but I have some ideas. 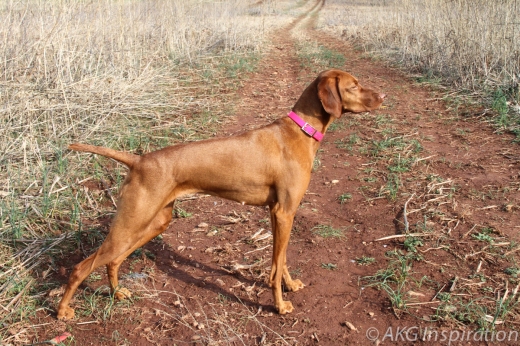 This might be one of them… She has been trained to hunt, which involves lots of NOT chasing and holding point.  So maybe she was a little conflicted.  But I don’t think that was really it as I have seen how much she will chase critters when we are out running the woods.  Some even advised me against this sport due to her hunting too, but I have not had her in the field in a while now in any formal way so I figured I would throw caution to the wind and give it a try anyway.

I really think she just could care less about plastic bags, she knows they are plastic bags not rabbits or anything remotely alive so why chase them???   As far as I know they don’t put any scent on them, if they had she would most likely have chased simply out of curiosity.  If they had hooked up some rabbit fur to that pulley system they probably couldn’t have run that machine fast enough.  I also think the type of field didn’t lend itself to newbie dogs.  The fact that the lure dipped and was lost from sight kinda defeated the purpose in my opinion.  But who knows if that really would make a difference.  Also Luna is quite a well behaved dog most days in public, the most she does is a bunch of fussing and whining about having to sit still.  I think if I had let her be crazy and not controlled she may have been a little more amped up about the lure coursing as there wouldn’t have been rules attached.  Sounds silly I know but that’s my over thinking girl, or it’s just me being crazy.  But it’s kinda like hunt tests, you let them be crazy so they are amped up in the beginning and when they are young and new to the sport, so you don’t dampen any enthusiasm so it has time to set in.  Problem with that is when you spend 5-7 hours waiting around I don’t like letting my dog act the fool.

Oh well, can’t say we didn’t try. I ended up not going to the actual CAT test the next day since she didn’t do well at practice and I thought it would be pointless, maybe I should have gone but I also didn’t want to be waiting half the day to run either.  I may give this a go again at another venue with a more flat field, we will see.  I was quite bummed that she didn’t take to it, as I was sure she would. But she likes to keep me on my toes for sure.

I am a native of Virginia but recently relocated to Maryland I often feel I am simply a visitor... here to take note of little things people often pass by... I enjoy photography, family, the outdoors, reading, my vizsla... etc etc
View all posts by Anna →
This entry was posted in Everyday Life and tagged bird dog, bird dog training, dog, dog sport, hungarian vizsla, hunting dog, lure coursing, pointer, shorthair, training, vizsla. Bookmark the permalink.

2 Responses to Chasing plastic bags…. or not