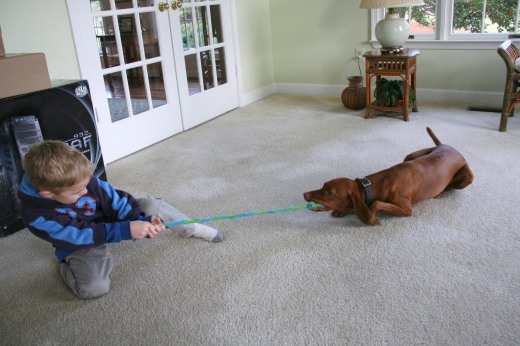 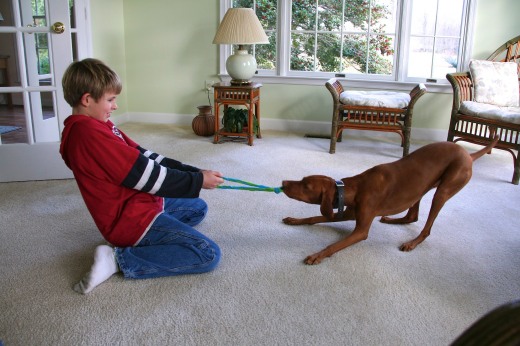 So just a very quick update.  This weekend was spent hanging out with family. My brother who lives in Canada came down for a visit with his wife and 4 kids.  They all really love Luna (and are quickly falling for Wyatt as well) so I always make sure I bring her over to hang out too. She spends time outside jumping on the trampoline with them, fetching sticks, hunting with Samuel (just with his toy gun), playing tug (yes, I don’t mind it with the kids and everyone but myself, she still very freely gives toys/birds up to myself and any that ask) and happily doing tricks for kibble/jerky/snacks.  As much as she loves them I think she enjoys having her routine back as well.  Ever since they left tonight she has been passed out in her bed, with Wyatt taking up the couch.  Hopefully the exhaustion will last for a couple days (not likely)

Due to the visit with family, she has gotten a break from the Whoa post since friday.  Yep, I finally started it last week.  It’s not fun, but honestly I still prefer it to the force fetch table. At least they get to see birds while they’re on the post.  Basically all this training is in efforts to have a steady dog. My ultimate goal with her is to make her steady to wing and shot. So basically she will hold her point until the bird is shot and down and she is sent to retrieve.  So far she has done pretty well on it. I am trying to be creative with finding ways to get her to mess up. So far she has had birds kicked up in front of her, pistol shot around her, thrown at her and on her back until it flew off.  She is picking it up fast. Next up will be to take it to the field and make it generalize there too. Honestly it will be nice to have a steady dog, it’s been annoying having to worry about where she is at when we are trying to get the bird up.  Then the final piece to the puzzle will be to get her to honor another dog, but that too is tied into the whole idea of “Whoa”  Hopefully she will be ready for some hunt tests in the spring, just got to keep doing all this daily as best I can.

And that my friends is a bit of what’s been going on lately in the Luna world. I know pictures have been lacking. I am between computers as I have finally gotten an iMac, so things are a bit scattered. Things probably won’t be regular again until I have all my programs on here to work up and sort photos.  And then you have christmas coming up and very few of my projects/gifts completed so just hang tight. I hope you all are having a lovely winter/fall thus far, so far we have just had snow flurried, wind, rain, and cold for about the past week or so.  Staying warm tomorrow should be interesting, better go prep for that.

(PS. please let me know if you have any problems with formatting of this post as it was done on a Mac.. I just want to be aware of any problems)

I am a native of Virginia but recently relocated to Maryland I often feel I am simply a visitor... here to take note of little things people often pass by... I enjoy photography, family, the outdoors, reading, my vizsla... etc etc
View all posts by Anna →
This entry was posted in Everyday Life, hunting and tagged dog, hunt training, iMac, pet, photography, vizsla, whoa. Bookmark the permalink.