Did I ever mention the photo contest we (and by we I mean Luna… whether she wanted to share her pretty mug or not) entered to win some yummy Arrfscarf dog treats???? Probably not huh, due to our overall lack of blogging.  But hey while you all are out having fun during the summer, I am surviving the busiest time of year… who else would care for the dogs while humans go on vacation? (I manage a boarding kennel if you wondered)  In any case, I never turn down a chance to win something especially if it involves a photo contest.  Doesn’t mean I win often, actually it is very rare, but hey it’s worth a shot right?

In anycase, our friends over at Love & A Six Foot Leash had a photo contest giving away these lovely treats… it’s over now though by a long time (June, wow) but I thought I would share some extra frames from the photo shoots while attempting to get a good shot for this contest.   The theme was your pup enjoying their favorite treat.  Well since Luna enjoys anything that I give her, that opened up quite a few options for photos.  So we went to town.

We will start with her least favorite request… I admit that pig nose may have been a tiny large but I couldn’t find a smaller option and I wanted to try it. You never know what will end up the winner… but after getting some of the other photos I passed on entering this one.

Then we moved on to the stacks of treats… 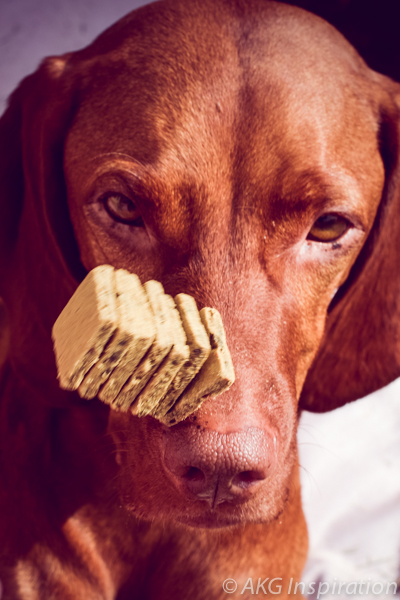 Met with some fails but she was a trooper.

I am sad we are out of these treats, they were so cute.  I need to make some though, seeing as I have a cute heart cutter. Someone lend me more free time.    I wasn’t overly concerned about composition in the moment, seeing as I had to worry about her not tossing and catching them to eat, or them falling off too quickly… all while trying to get her attention for a photo.

THIS has been an idea in the making for a while, yes those are various treats on her.  It didn’t work out as planned, due to her svelte physique and treats feeling the need to slide right off her.  I laid down as many as I could get to stay, her whining did not help as it moved her stomach. I kept her quiet by feeding her treat when she chose to be quiet.  I took a video of this maybe I will post sometime. In any case I can check it off our list, and she was a trooper yet again. She got to eat many of them when I released her too.

She enjoys this one as it’s the beginning of her being released to toss and catch it.  This is probably the cutest shot i have of her doing this trick too. It’s rare to get eye contact from her and half ear perks. 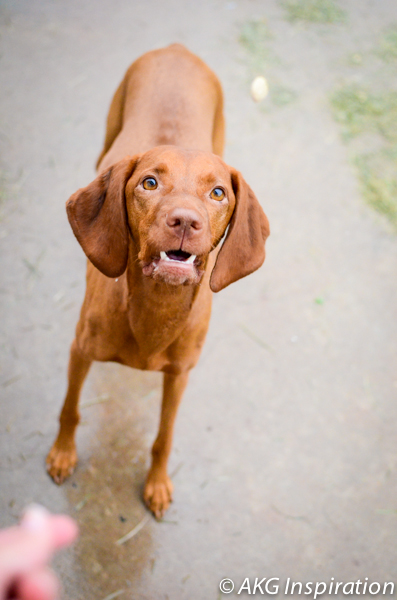 But then we moved on to my money shots. Here are some favorites from our attempts.  I am SO happy I tried this idea as it provided some very cute photos. I will have to try it again when it’s NOT raining outside.

Do you see it entering her mouth??

PS, I LOVE this one for some reason.

This was the one that brought home the bacon, or Arrfscarf treats I should say. And Luna was just as happy about that as I.  And I love this shot, and have no idea how I got so lucky 🙂  I hope to do a review of what she and I thought about the treats, I documented the reaction now let’s hope I can find some time.
Does your dog have a favorite treat?

I am a native of Virginia but recently relocated to Maryland I often feel I am simply a visitor... here to take note of little things people often pass by... I enjoy photography, family, the outdoors, reading, my vizsla... etc etc
View all posts by Anna →
This entry was posted in Everyday Life and tagged arrfscarf, contest, dog treat, dog trick, hungarianvizsla, nikon, photo contest, photography, vizsla. Bookmark the permalink.